I am a critic of the notion of differentiation, yet part of the problem is that it is so poorly defined. There are many practices that you could describe as ‘differentiation’ that I employ daily, for instance in the choices that I make when asking students to demonstrate their work on the board or by allowing a subgroup of my class to continue with an activity while I review the homework task with the others. These are practical and pragmatic approaches to recognising the different needs of students in my class.

However, ‘differentiation’ encapsulates a much larger set of practices. In an article for The Conversation, Linda Graham and Kathy Cologon set out to explain the meaning of differentiation for the lay reader. They begin by claiming that differentiation is poorly understood. In the passage below, they link to a speech by U.K. education minister Nick Gibb and then two articles of mine in order to demonstrate these misconceptions:

“This lack of understanding is reflected in criticism describing it as “dumbing down” by “asking different students to complete different activities in the same class”.

Actually, differentiation is about teachers providing choice to avoid discriminating against students who may be disadvantaged by “one size fits all” approaches. This does not mean creating different lessons for, or “simultaneously individually” instructing, every student.”

I might be missing something here, but I’ve searched the Gibb speech for the phrase ‘dumbing down’ and I can’t find it. Instead, he mentions me in the speech and refers to the fact that countries that perform well in PISA don’t tend to differentiate all that much. This claim derives from a questionnaire (known as ‘TALIS’) that the OECD send out to teachers in member countries. One of the questions asks lower secondary teachers how often they “give different work to the students who have difficulty learning and/or to those who can advance faster”. I have noted that high-performing PISA countries tend to do less of this than lower performing ones.

The second link refers to an article I wrote for the TES. The authors seem to be making the claim that I have misunderstood differentiation if I think it is about asking different students to complete different activities in the same class. In fact, this is how differentiation is commonly conceived. Probably the world’s foremost proponent of differentiated instruction is Carol Ann Tomlinson of the University of Virginia. She has written extensively on differentiation and one of the authors of the Conversation article has recommended reading her work on this topic. Tomlinson is also a co-author of an article cited as supporting evidence in the Conversation piece.

“Teachers can differentiate at least four classroom elements based on student readiness, interest, or learning profile: (1) content—what the student needs to learn or how the student will get access to the information; (2) process—activities in which the student engages in order to make sense of or master the content; (3) products—culminating projects that ask the student to rehearse, apply, and extend what he or she has learned in a unit; and (4) learning environment—the way the classroom works and feels.”

In the same article, Tomlinson makes a point that is worrying to those of us who are sceptical about differentiation. One means of differentiation could be, “putting text materials on tape.” Why would you do this? It sounds a lot like ‘watering down content’ and yet the watering down of content is, apparently, a misconception about differentiation. You might perhaps choose such a strategy for a student with a reading difficulty. But the result of this would be the student doing less reading than her peers; hardly the best strategy for catching-up. As a one-off, this is unlikely to have much effect but as a systematic process over time, the potential “Matthew Effect” of differentiation is a concern. 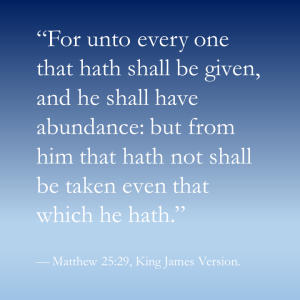 And did you notice the reference to differentiation according to “learning profile”? This is about assessing students’ learning styles and ‘intelligences’ as well as gender and culture. This article by Tomlinson explains the process. I probably don’t need to point out to my readers that there is no evidence to support the practice of differentiating lessons to students’ supposed learning styles and I recall that even Howard Gardner, the originator of multiple intelligences theory, has criticised attempts to apply this model to education.

The third link refers to my point that, “It seems truthy enough that catering to individual needs will be better for students but it ignores the realities of the classroom; a teacher cannot simultaneously individually instruct 30 students.” Perhaps I did go too far here. Programs of differentiation do not tend to attempt to do this. They try to meet individual needs by giving a range of options, but not usually an individual option for each student. As Tomlinson notes,  this was tried in the 1970s and was found to be completely impractical. The current model of differentiation therefore represents a retreat from this ideal, albeit one that I still suggest poses immense practical difficulties.

Despite linking to my stuff, the Conversation article does not address the evidence that I present. I have already mentioned circumstantial evidence from PISA scores but there is another study that cuts to the heart of the matter. In 2005, Tomlinson and others reported on a large-scale attempt to implement a systematic approach to differentiated instruction in schools in three U.S. states. Usually, such studies tend to show positive results because there is an effect of merely being involved in some kind of intervention. Such interventions tend to represent the best possible scenario for implementation because researchers are available to advise and teachers and students are enthused by being part of a project (this is why John Hattie sets an effect size threshold of d=0.40 rather than d=0.00). However, the researchers could find few significant effects of the differentiated instruction intervention. They noted that differentiation is a complex and difficult thing and pointed out the many pressures on teachers and the fact that they often didn’t implement the intervention properly.

We might wonder what would have happened if differentiation had been implemented properly. But we might equally conclude that this is evidence of how, even under the best possible conditions, differentiated instruction is simply an impractical approach. It may seem attractive to theoreticians but practitioners realise that this is not a zero-sum game. If teachers spend more time planning – which they will have to do if they are to plan a range of different learning pathways – then what should they do less of? If a teacher is interacting with one subgroup within a class then she cannot be interacting with the rest of the class. So there are losses as well as gains and the losses could well outweigh the gains.

Tomlinson has an answer for the latter point; we should teach students to require less teacher input.

“…teachers in differentiated classes understand the need to help students take increasing responsibility for their own growth. It’s easier sometimes in large classrooms for a teacher to tell students everything rather than guiding them to think on their own, accept significant responsibility for learning and develop a sense of pride in what they do. In a differentiated classroom, it’s necessary for learners to be active in making and evaluating decisions. Teaching students to share responsibility enables a teacher to work with varied groups or individuals for portions of the day.”

This is an interesting idea and it would be good to have some supporting evidence.

And evidence is the main thing lacking in the Conversation article. There are no empirical studies supporting differentiation, even if my own articles are linked multiple times. There is a citation of a special education study that may or may not be related to a particular differentiation strategy. There is a link to a whole load of papers on “Universal Design for Learning” published via the “National Centre on Universal Design for Learning” website. From the summary, it appears that these are mainly related to the idea that increasing students’ choice over the tasks they complete increases engagement. This could be a part of a differentiation approach but I am sceptical about it and with good reason. The key issue is whether these methods enable students to learn more and, judging by the summary, it looks like this hasn’t been tested.

Instead, the case for differentiation is made with the aid of a clip from a movie and a warning that we all have to differentiate anyway because it is the law.