The Programme for International Student Assessment (PISA) is run by the OECD which conducted its last round of testing in 2018. The long-awaited results of PISA 2018 have just been published. I am not interested in absolute scores and overall rankings because so much can vary between different countries and states: socioeconomic status, homogeneity of population, prevalence of tutoring etc. Instead, I focus on the direction of travel of different education systems.

I will post more analysis as I have it, but I will start with a few headlines.

Firstly, the darling of progressive educators everywhere, Finland, continues its unrelenting slide in performance since 2006: 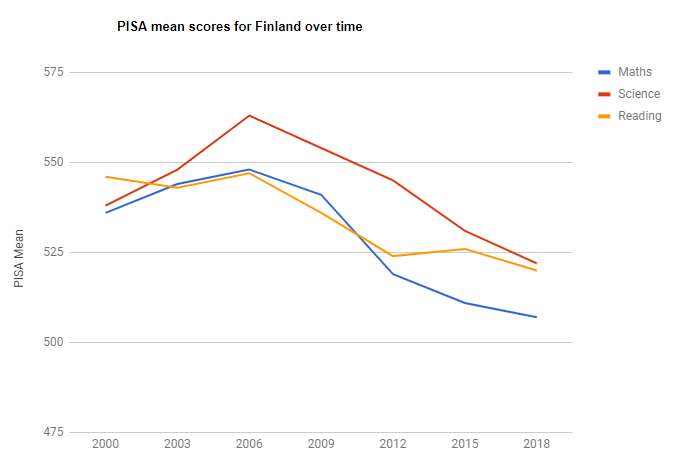 Finland made its name in the early 2000s on the basis of students who had received a pretty didactic and traditional educational experience. However, when anglophone observers then visited the country, they looked at it through the lens of their own ideology and attributed Finnish success to progressivist approaches. It seems that Finland was taken in by some of this hype. They introduced ‘phenomenon-based learning‘ and a range of other more fuzzy approaches. We cannot know for sure what has caused Finland’s decline, but the data is highly suggestive that any changes made in the last 10-20 years have not been for the better.

Which is why, finally, Australian educationalists should put to rest any ideas that contemporary Finland is the system to copy. Australia has continued to decline in all but its mean reading score, which has flat-lined:

If we are going to learn from anyone, it should be systems that have been improving rather than declining. At present, our grand plan is to adopt practices that were abandoned in England nearly a decade ago, while the state governments push an agenda of reduced accountability, as if smashing the thermometer will stop your house from getting cold.

I do not yet have the dis-aggregated data for England, but, in terms of population, it forms a large proportion of the United Kingdom and the UK seems to be improving in reading and mathematics, even if the science score may be slipping a little: 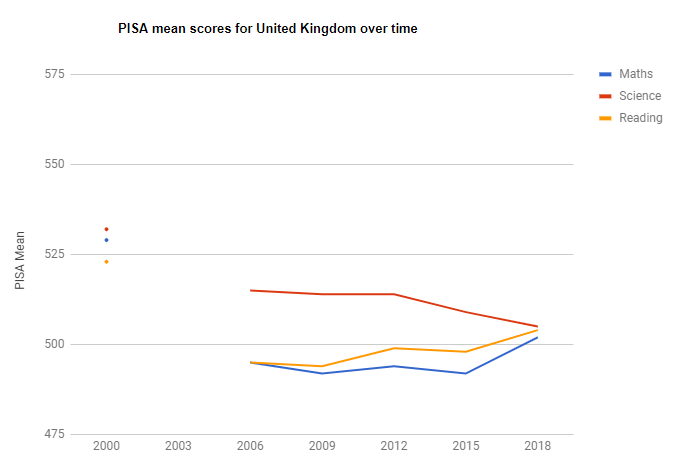 England has made efforts since 2010 to adopt more of a knowledge-rich curriculum. If E. D. Hirsch Jr. is correct, this should eventually lead to an improvement in reading comprehension and so the reading result may possibly reflect such a process. There has also been a renewed emphasis on maths teaching, with the introduction of ‘maths hubs‘ to push best practice based on Chinese-inspired explicit teaching approaches. Again, we cannot be certain that these results have been caused by these policies, but it at least gives us a hint.

What we can no longer point to is any broad evidence from PISA that adopting progressivist education policies is associated with higher performance. And before you dismiss the PISA evidence, bear in mind that these are not tests of recall, but are attempts to test students’ ability to apply reading, maths and science knowledge to relatively complex real-world problems. I suspect that the intent was to give progressive practices the most favourable playing field as possible on which to compete.

What kind of improvement in a school system would not lead to an improvement in students’ abilities to apply what they have learnt to complex, real-world problems?

I cannot think of any.

View all posts by Greg Ashman

41 thoughts on “Australia and Finland slide further in PISA 2018”