Pasi Sahlberg has recently been appointed to the newly created Gonski Institute at the University of New South Wales where he will be working alongside Adrian Piccoli, a former New South Wales education minister.

It’s not clear exactly how Sahlberg will use this role and I will return to that later. But first, it is worth considering why he was appointed.

Sahlberg is a former director general of the Finnish education system. He has written and lectured extensively about the Finnish approach to education. The Finland connection is key. Reporting of his appointment has drawn heavily on the high performance of Finland on tests run by the Programme for International Student Assessment (PISA).

I think there is a problem here. Australians seem to assume that, because Finland is ranked highly on PISA, Sahlberg must be able to offer advice that will improve our system. This is flawed.

Firstly, Finland is very different to Australia. It has a far more homogeneous society. Children start school later than in Australia, but their language skills are already well developed and up to a third can already read. Those who can’t, face a much easier language to learn than English. This is because Finnish has a ‘transparent orthography’, meaning that letters map reliably to sound with little ambiguity (see Shanahan on these factors).

By contrast, English has a more complicated orthography, with many letter combinations representing more than one sound and many sounds being represented by more than one letter combination. This is why an early grasp of phonics knowledge is so important and why a phonics diagnostic screen for Australian students has been supported by many language experts.

It is worth pointing out that England have adopted such a screen and the early signs of its effectiveness are extremely positive. As measured by PIRLS, another international test, the reading performance of the most vulnerable children has improved since its introduction.

However, Sahlberg thinks we should not bother with such a check:

“I think what the government in Australia could do instead is before thinking about these sorts of things is to make sure every child has enough time to play before they come to school.”

I have never met an educator who is opposed to children playing and so setting this up in opposition to a five minute screen is a bit like saying that children should not have the polio vaccination because they should be playing instead. Presumably, Sahlberg is not simply opposed to the screen but to the phonics instruction associated with it; instruction that is often playful and that my own children rather enjoyed.

But this returns us to the issue of Sahlberg’s role. On Twitter, he suggested to me that he does not intend to tell Australia to do what Finland has done:

My mission is not to tell anyone "you should do what Finland has done!" If you see it somewhere, please correct that.

And yet this is exactly what he seems to be doing with the phonics check, as well as his other pronouncements.

If Sahlberg wishes to make these arguments then he should be upfront about this and expect many of us to disagree. I look forward to taking him up on his suggestion that we meet and discuss these issues.

The fact that Sahlberg draws authority from Finland presents us with a further problem. As seen in the graph at the top of this post, Finland’s performance in PISA has been dropping. New research by Altinock, Angrist and Patrinos, aggregated scores across a range of measures and this seems to show that Finland obtained most of the gains in its performance in the 1980s and 1990s: 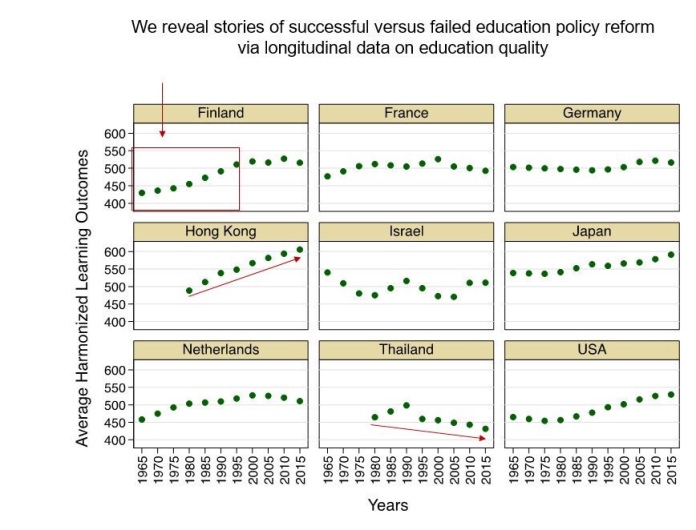 It is worth noting that the Finnish system has changed over time and there was more control and a more traditional approach in the years when these gains took place. If we want to achieve similar gains then we might be better to look at these policies rather than the ones Finland has enacted more recently (and certainly not ones they intend to enact in the future).

Ultimately, it is evidence to which we should defer, something that has been largely missing from the reporting so far. If Sahlberg has a case to make then he should do so and present his evidence. Borrowing authority from Finland will not do. If he just wants to listen then that’s fine. But he can’t have it both ways.

John Kenny has also written a post on this topic. It’s well worth a read.

32 thoughts on “Pasi Sahlberg says he is not in Australia to tell us what to do, so why is he offering advice?”