Follow Filling the pail on WordPress.com
Join 20,676 other followers

The more I analyse the PISA data set, the more I am surprised by what PISA have chosen to highlight in their recent report. The PISA measure of memorisation – a topic stressed by PISA and by Boaler and Zoido in a follow-up article – hardly correlates with PISA maths results at all. Teacher-directed instruction and student-oriented instruction appear to be more significant.

One of the questions asked by PISA in the category of “student-orientation” is about how often a student’s maths teacher, “Assigns projects that require at least one week to complete.”

This seems to correlate negatively with the PISA 2012 mean maths score. 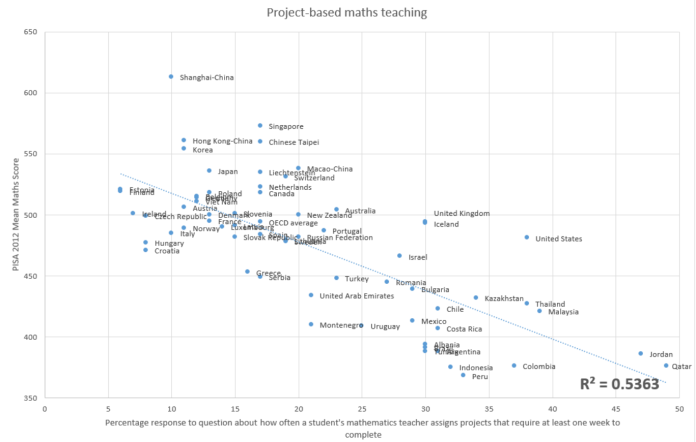 Should we therefore avoid project-based learning in mathematics?

Obviously, there are a number of limitations to this analysis. Can we really compare jurisdictions like this? And as Ben Wilbrink pointed out on Twitter, students are not simply influenced by what their current teachers are doing but also a great deal by what their previous teachers did. Nevertheless, I am following the kind of analysis that PISA have themselves chosen to highlight.

We could perhaps address the first of these points – comparability across systems – by looking at the students in each jurisdiction and comparing the way that their maths performance relates to these various different measures. This is what Caro, Lenkeit and Kyriakides did in a paper published earlier this year (thanks again to @cbokhove for the link).

Caro et. al. also looked at a number of other measures in this way. For instance, they examined measures of classroom climate (note that they analysed 62 systems in total, omitting Albania and Lichtenstein for methodological reasons):

This is interesting. I would expect classroom management and discipline to correlate positively with performance but I would have thought that teacher student relations would also correlate positively. It might be worth examining the questions that PISA asked in order to come up with this measure.

They also looked at the teacher-directed and cognitive-activation measures that I investigated across countries. I found a weak, negative correlation between both of these and maths performance (here and here). Caro et. al. decided to try to fit curves to these relationships rather than straight lines, on the plausible assumption that there are diminishing returns to be had by further increasing the use of a strategy once there is already a lot of it going on. Across education systems, they found*:

Examining these graphs by eye is not massively convincing. They appear to me to show little indication of any relationship at all. I suspect that the student-orientation construct is capturing something real about what is happening in lessons; something that impacts upon performance. I am not sure that these others do.

7 thoughts on “PISA evidence for project-based learning in maths”